Ok, I'm totally lost on deadlock issue. I just don't know how to solve this.

I have these three tables (I have removed not important columns):

And these two procedures:

Now these are used this way (it's a simplified C# method that creates a record and then posts record to a micro service queue):

Now my problem is. Why are these two procedures getting deadlocked? The first and the second transaction are never run in parallel for the same record.

Here is the deadlock detail:

Why is this deadlock happening? How do I avoid it in the future?

Edit: Here is a plan for Get procedure: https://www.brentozar.com/pastetheplan/?id=B1UMMhaqF

Another Edit: After GSerg comment, I changed the line number in the deadlock graph from 65 to 40, due to removed columns that are not important to the question.

You are better off avoiding serializable isolation level. The way the serializable guarantee is provided is often deadlock prone.

to the table variable.

Then join that against [dbo].[ServiceChangeParameter] to get your final results.

It may be instructive to look at the exact locks taken out by the SELECT running at serializable isolation level. These can be seen with extended events or undocumented trace flag 1200.

Currently your execution plan is below.

For the following example data

The order of locks taken is indicated in the image below. Range locks apply to the range of possible values from the given key value, to the nearest key value below it (in key order - so above it in the image!). 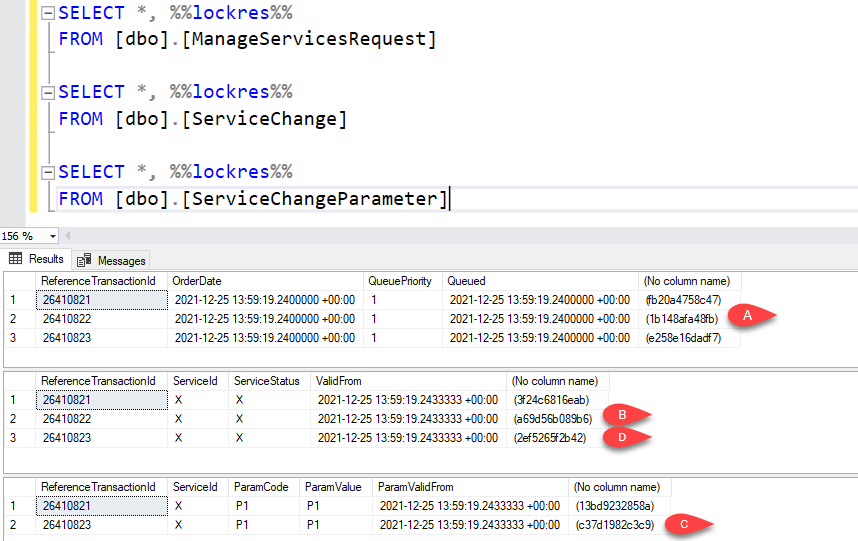 First node 1 is called and it takes an S lock on the row in ManageServicesRequest, then node 2 is called and a RangeS-S lock is taken on a key in ServiceChange the values from this row are then used to do the lookup in ServiceChangeParameter - in this case there are no matching rows for the predicate but a RangeS-S lock is still taken out covering the range from the next highest key to the preceding one (range (26410821, 'X', 'P1') ... (26410823, 'X', 'P1') in this case).

Then node 2 is called again to see if there are any more rows. Even in the case that there aren't an additional RangeS-S lock is taken on the next row in ServiceChange.

In the case of your deadlock graph it seems that the range being locked in ServiceChangeParameter is the range to infinity (denoted by ffffffffffff) - this will happen here when it does a look up for a key value at or beyond the last key in the index.

An alternative to the table variable might also be to change the query as below.